Normally, this is not a dish I would make but seeing there was a blue moon out tonight (this is my excuse and I am maintaining it), I had to make it. My husband and I received a The Bacon Cookbook, from some good friends this Christmas. Since then, I have heard nonstop about bacon from my husband. So, I decided to have some fun. On YouTube, there is a group of men, that every Tuesday, post a new video of some epic creation they make. I first saw their video during Thanksgiving where they proceeded stuff  a bird, in a bird, in a bird, in a bird, in a bird, in a pig…. They then sat down and ate the entire creation. I believe that the total calorie count was about 80,000 calories! The video can be viewed here.

This video fascinated me…for many reasons but the one thing they did that I actually wanted to try was a Croissant-Bacon Stuffing. So I made up a recipe. 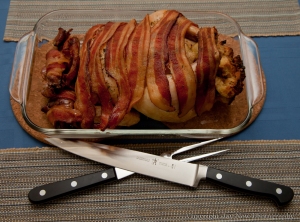